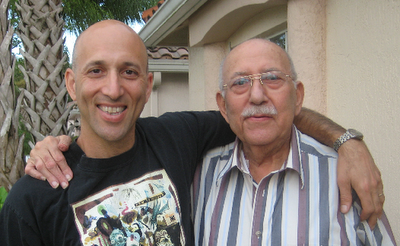 Today would have been the 82nd birthday of my father, Sheldon Feuerstein. I miss him lots. He was a man of many talents, sharp intellect, intense devotion to family (above all else), and a deep, gravelly voice that still echoes through my brain.

And he got better as he got older! His temper mellowed, he became more open-minded, willing to challenge long-held beliefs. He got less grumpy, and overall more positive and supportive.

Dad was never terribly satisfied with what he'd accomplished with his life, and constantly wrestled with regrets. That irritated me to no end, since he was so well respected by everyone who crossed his path. He applied his intellect and workaholic tendencies (which I seem to have inherited) to ensuring his family, and most importantly his wife, was and is financially secure.

Sure, he could have done some things differently. But so much of what he did and accomplished required no correction, no regrets at all. I suppose he just set the bar higher for himself, and that does seem like a better thing to do than setting it too low.
Posted by Steven Feuerstein at 12:14 PM