In 1977, one of my best buddies told me about a friend he had, who had just custom-built a bicycle for him, from components. This guy would do the same thing for me. "How cool is that?" thought I.

A few weeks later, for (according to my admittedly leaky memory) about $200, I received a bicycle that became one of my all-time favorite machines.

It was built around a black Raleigh Competition Reynolds 531 double butted steel tubing. It was powered by a lovely, engraved, all-metal Shimano 600 Arabesque derailleur ("One of the most decorative groups Shimano ever released"): 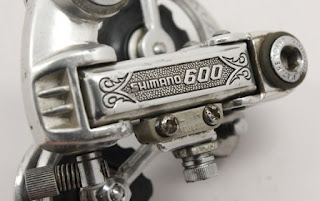 The bike was a beautiful ride and all-around excellent transportation. It came to Chicago with me in 1981. It took me downtown for my first job as a programmer in Chicago, at First National Bank (I commuted by bike whenever possible). It accompanied me on day trips all over Chicagoland. It took me back and forth to the CISPES office, a cause and organization that consumed way too much of my life for too little in return. Whatever foolishness I chose to engage in, this bike helped me do it in style (my style: it was scratched up and usually dirty, but the chain and gears were clean and lubricated).

But for some reason (yes, that's right, I do not recall), about fifteen years ago, I decided to buy a new bicycle, and chose a Jamis Coda. I hung the black bike (I don't know what else to call it. It used to be a Raleigh Competition, but that was long before I took possession) in the back of my shed, and very much enjoyed the Coda. It was new, it was shiny, and it was a hybrid, better suited for city riding. After a while it wasn't new or shiny anymore - just my style, but it was still a great ride. I didn't think very often about my black bike, even when I noticed it hanging behind garden gear and abandoned kids' toys.

Well, a couple months ago, I got careless with my Coda and it was stolen. Arrrrggggh.

I figured I would buy a new bicycle, which I dreaded in part because everything has gotten so over-built, optimized for convenience, unnecessarily fancy, etc. Not my style. Started looking around and found myself at Bucephalus Bikes, where they do a brisk, proud business in reconditioning older bicycles to better-than-new.

That got me thinking: maybe I should bring in the Reynolds 531 frame (by this time, I was thinking that was all that was left of the bike) and see what it might cost to make it a beauty, once again.

I hauled it out of the shed and was delighted to see it was intact as a bicycle, but with understandably flat tires, rusty chain, and who knows what else wrong with it. I did, after all, choose to stop riding it long ago.

Feeling slightly guilty at not returning to Bucephalus, I brought the black bike to my neighborhood bike shop, Roberts Cycle. They made appreciative noises. They probably do that with all their customers. :-)

Well, in any case, a few weeks went by and yesterday I rode the bike home - smoooothly. Here are the parts Roberts needed to properly restore the bike:
Yes, you read that right. They removed the Shimano 600 and gave me a "good enough" replacement for a very fair price. He never asked if I wanted to replace it. WTF? The guy who runs the shop explained that the 600 was actually not compatible with the rear gear assembly on the bicycle; I couldn't get to all the gears using it. So he swapped it out.

Gee, I'd never really noticed any problem. I rarely needed the very low settings. I started to feel aggrieved and righteous about the whole thing, but he so sincerely seemed to consider it an act of necessity. So in the end I accepted with grace (or so I told myself) the Shimano 600 (and every other part, including the old ball bearings - !!) in a plastic bag.

I tried not to be too sad. It really is pretty.

No, I won't tell you how much all those parts (and the accompanying, thoroughgoing overhaul) cost me. I suppose I could've gotten a new bicycle for the amount, but nothing as elegant or satisfying as my black bike.

And as I said in an earlier post, "New is Bad. Buying things new is the way to consume the most resources and have the worst impact on our world. So I am going to make every effort to avoid buying new things and instead by used."

Hurray! I acted on my principles. I have lots of principles and I never feel like I act enough in accordance with them. I also am not sure how many I've forgotten.

So this act of reuse and redemption felt - and feels - really good.

Now if only it would stop raining so I could go out for a ride!

About My Son, Chris Silva, Amazing Artist, Father and All-Around Human Being 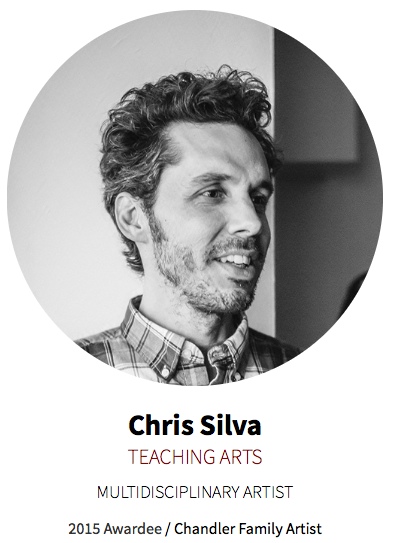 Chris is the 2015 recipient of a 3arts grant, which makes me incredibly proud and also gives me the opportunity to share his professional art bio (I mostly experience him these days as Papa to my two wonderful granddaughters).

Born in Puerto Rico, Chris Silva has been a prominent figure in Chicago’s graffiti and skateboarding scenes since the 1980s, as well as an enthusiastic fan of a wide range of music genres which have resulted from the influence of metropolitan life. Building on his solid graffiti art foundation, Silva proceeded to play a significant role in the development of what is now commonly referred to as "street art." He now splits his time between working on large-scale commissions, producing gallery oriented work, and leading youth-involved public art projects. As a self-taught sound artist with roots in DJ culture, Silva also anchors a collaborative recording project known as This Mother Falcon, and has recently started integrating his audio compositions into his installation work.

In the early 90s, Silva worked on a mural with the Chicago Public Art Group and was eventually brought on board to help lead community art projects with other urban youth. As a result, the act of facilitating art experiences for young people has become an important part of his art practice, and he regularly includes students as collaborators on large-scale artwork that often leans heavily on improvisation. Over the years, Silva has helped orchestrate youth art projects both independently and in partnership with Chicago Public Art Group, Young Chicago Authors, Gallery 37, Yollocalli Arts Reach, After School Matters, and the School of The Art Institute of Chicago.

Silva was awarded a major public art commission by the Chicago Transit Authority to create a mosaic for the Pink Line California Station (2004); created block-long murals in Chicago's Loop “You Are Beautiful” (2006); created a sculpture for the Seattle Sound Transit System (2008); won the Juried Award for Best 3D Piece at Artprize (2012); and created large commissions for 1871 Chicago (2013), the City of Chicago, LinkedIn, CBRE (2014), OFS Brands, and The Prudential Building (2015). He has exhibited in Chicago, San Francisco, Los Angeles, New York City, Philadelphia, London, Melbourne, Copenhagen, and The International Space Station. In 2007 Silva received an Artist Fellowship Award from The Illinois Arts Council.
Posted by Steven Feuerstein at 12:59 PM No comments: