I have decided that I really hope that Oracle gets to keep mySQL when it completes the acquisition of Sun (though I can certainly understand if the European Union draws the line and demands that it be spun off).

First, I am certain that Oracle will treat it right, probably do a better job of supporting and enhancing it than has Sun, simply because it has deeper pockets with which to finance such an effort.

Second, as you may have read by now, IBM has announced support for PL/SQL-based applications on DB2 9.7. So? Well, I think there is a rather good chance that in a few years, all of IBM's DB2 variants will support PL/SQL.

And if Oracle keeps mySQL, it seems to me that there is every reason to believe that Oracle will port PL/SQL over to mySQL, so that it has a solid programming language with which to manipulate mySQL data (the current state of mySQL's stored procedure language is not very encouraging).

Add to that the fact that PL/SQL now also runs on Oracle's Times Ten database, and it is possible for me to dream about a day when PL/SQL will become the de facto standard database programming language for SQL/RDBMS databases (well, except for Microsoft SQL Server).

What does that mean? I can sell more books! Do more trainings and webinars!

Go, PL/SQL, go!
Posted by Steven Feuerstein at 4:08 AM 3 comments: Links to this post

An opossum in our tree

We thought we had a squirrel nest in the English Oak in our backyard - we certainly saw squirrels running around in the tree, and we could see a big bunch of leaves collected in the heart of the tree.

It also looked like the squirrels were actually able to bend down a branch from the English oak (which grows vertically for a long time and does not spread its branches) to form a bridge over to the pear tree and then to the garage.

But then recently I saw that a very thick branch had been bent at a sharp angle across to the neighbors yard: 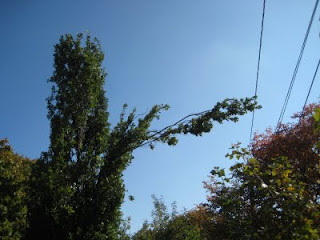 Today, that branch above was bent almost down to the fence. It looked clearly broken - I investigated. It was. So I sawed it off and then Veva said: "Look, there's an opossum in the nest!" And then all became clear: that was no skinny little squirrel bending these branches. It was a big fat opossum: 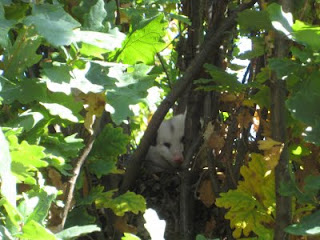 Software - and testing it - is a very funny thing. Seems to me that in some ways software is our (humanity's) closest attempt to be gods - to create our own worlds.

In the real world, the "organic" one, stuff just happens and it is beyond beautiful. In the cyberworld, we - humans - must be the gods who pay attention to every detail. And every detail has to be right - which is awesomely overwhelming as tasks go.

To achieve the goal of a functioning, sustaining world, we have to explicitly and thoroughly test our software. In the real world, when stuff doesn't work, it does and does not make it to the next generation.

Can you imagine telling a god that it has to test its creation before we are expected to live in it? What an insult! The resulting fury would surely scorch a civilization or two to embers (perhaps that was really the sin of Sodom). So you can understand why we programmers do so little and so ineffective testing. It is insulting to think that what we wrote does not work, does not meet the needs of our users.

Well, it's hard being a god, but after a while you get used to it. You drink another Diet Coke, make snide comments to other gods about the fickleness of your subjects, and think up another methodology that will hopefully get you that much closer to perfection.

Somehow, I don't think that humans are up to this task.

But from one software developer to another (if that is what you, my reader, are), BEST OF LUCK!
Posted by Steven Feuerstein at 3:35 AM 3 comments: Links to this post

I am so happy. The Summer Olympics will not be in Chicago in 2016.

I thought it was such a bad idea. It was basically an attempt by Mayor Daley to establish his "legacy" of making Chicago a "great" city. It would have been a disastrous mis-allocation of resources very much needed elsewhere.

I tell you what, Mayor Daley, how about if you establish your legacy by ending the almost every day killings of children (almost always African-American) in your city?

It really burned me up that he could spend so much of his time, our money, etc., on trying to get the Olympics and so little of his time, effort, our money on making this city safe and healthy for its children. Disgusting.
Posted by Steven Feuerstein at 10:59 AM 7 comments: Links to this post