That's a question I get a lot.

I guess that's because I am not overweight and kind of tall....?

I can remember a few times when I really enjoyed running: both times they were more an adventure, in which running was the mode of transport. But generally, I have been bored by running so, no, I am not a runner.

In fact, over the past year, I have completely changed my views on exercise, and running is even less a part of what I do to stay healthy than ever before.

And for some reason I've decided to share my changed views with you. Maybe you will be interested. But at least when I am done, I can say: Good, I don't have to think about writing this anymore.

I'd been a member of Bally Fitness since 1988, when Oracle offered to subsidize membership in a fitness club (said subsidy rescinded two years later!).

But early in 2013 I decided that I had had enough of exercising on machines, inside sterile buildings, in order to stay fit. It's a pretty awful way to compensate for a sedentary life, when you think about. Moving your limbs through a series of limited, repetitive motions, while watching TV or listening to music or who knows what. That's not the same as living in the world, exercising our bodies as we evolved to live and thrive. Not even close.

So I quit Bally (by then acquired by LA Fitness, which promptly shut our closest club after the acquisition. Clever people) and now get my "exercise" by going outside for long walks, very occasionally a run, and most important of all (to me) fighting invasive species (buckthorn in Chicago, kudzu in Puerto Rico).

Cutting down trees, clearing brush, pulling out invasive sapling trees by their roots: great exercise! (so long as I do not injure myself, which I must confess has not been one of my strong points).

But I will admit that is not all I do. I am getting older each day, definitely well into middle aged now, and I am getting creaky. If I do not stretch, I am much more easily injured and I just don't feel good. Flexibility is a wonderful thing!

In addition, I have discovered the joy of a strong abdomen. I have found that as long as my "core" muscles are well maintained, I no longer have problems with lower back pain. In addition, I have noticed that I move around the world with greater confidence and (dare I say it?) grace - because my abdominals can easily support my torso as I move around.

So what does all that mean? That I do a set of abdominal exercises (crunches, situps, various things) each day.And a bunch of different stretches. Oh, and I've found that outdoor work involves lots of bicep activity, but not so much on the triceps. So I do some of that indoors, too (another key objective for me to stay in shape is to be able to play, hold, fly like airplanes, etc. the children dearest to me, and upper body strength is key for this).

Which brings me, really, to the basic point of this post (still with me?): I think that I am a fairly disciplined person, but I could never remember all the different stretches and exercises I want to do each day without a reminder. And I have found that unless I work from a checklist, it is all too easy to say "Aw, I don't feel like doing that one today."

So I put together a very simple grid that lists the things I want to do each day. I don't care about (for the most part) how many I do, just that I do it. And I don't beat myself up if I miss a day or a stretch. There's always tomorrow. 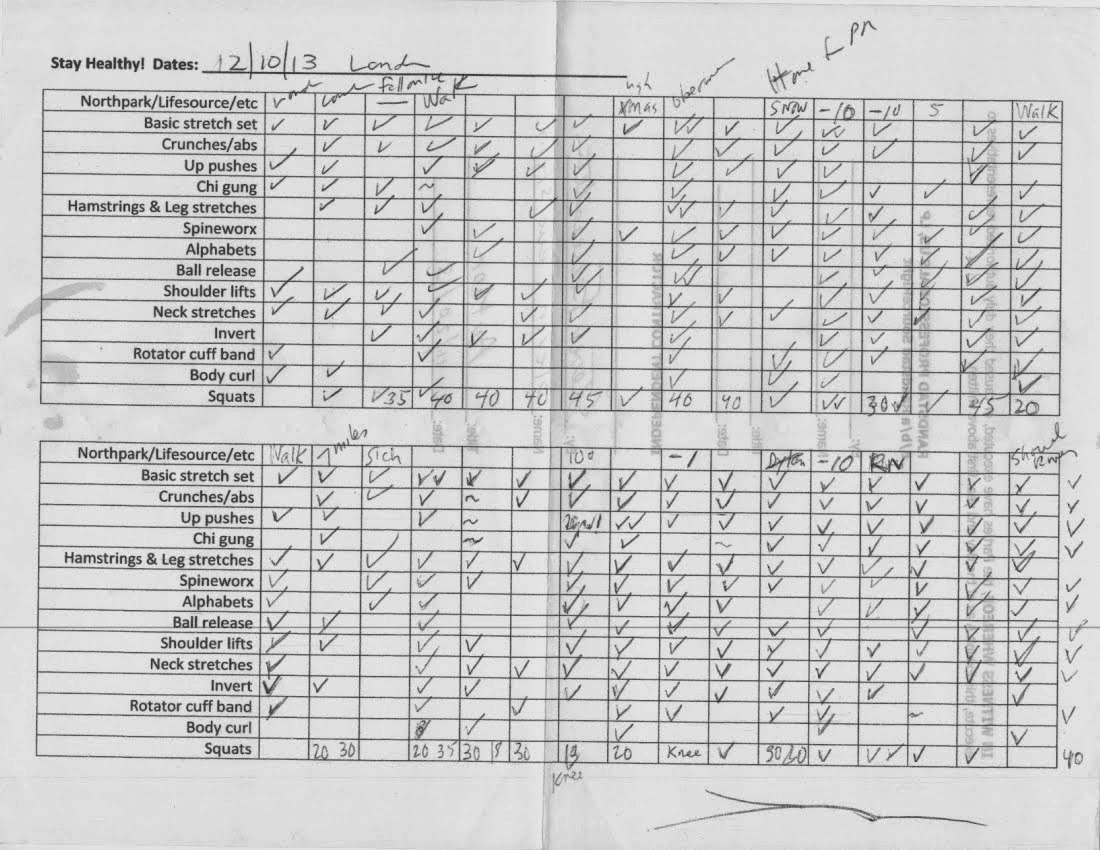 Posted by StevenFeuerstein at 6:19 AM