I spent last week in Europe, a very nice trip in many ways. I was invited by the German Oracle User Group (DOAG) to do a keynote presentation at their annual conference in Nurnberg (Nuremberg). So I built a week of activities around that event.

First of all, I flew out to Germany from North Carolina, where I'd spent the weekend watching my nephew, Brian Daniels, play in his last college football game (actually in Danvilla, Virginia, at Averett University). Now he will continue to train hard, attend the Spring 2010 Combine, and hopefully be invited by an NFL (or other professional football league) team to actually make a living from football. Talk about tough jobs.

I have discovered that it's quite a lot fun hanging out with college football players. In my experience, these massive, heavily muscled, incredibly disciplined young men are also unfailingly polite and very sweet. Big teddy bears. Until they get on the field. Then it's all business.

Well, so from Raleigh, NC, my wife Veva went home on Sunday - and I took a flight to Heathrow. Then after a few hours layover (spent comfortably in the British Airways premier lounge in Terminal 5), I took another plane to Frankfurt, and from there a 2.5 hour train ride - and finally I was in Nurnberg. I was up for over 30 hours, but I must say my body is a strange machine. It doesn't really object too much to such situations. In fact, when I got to the hotel after being awake for some 25 hours, I went down to the fitness and exercised for an hour.

In any case, the DOAG conference was incredibly well-organized and well-attended. I did a short technical talk on Tuesday, organized at the last moment, and still had an overflow crowd of developers show up. DOAG asked me for a "head shot", so I sent my standard zip file with a wide variety of photos, mostly just to be entertaining. For example, it contains this photo: But that doesn't mean they are supposed to use such photos, correct? Well...you never know. So DOAG (and Quest Germany) apparently decided that they wanted a somewhat "formal" appearance for me. So I arrived at the conference center and found variations of the following photo appear on agendas and signs and so forth: 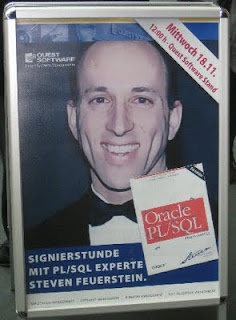 I haven't seen me in a tuxedo in a long time! I sure didn't wear a tux at the conference. Heck, I didn't even bother with a suit. Lots of people still wear suits in Germany, I have found.

On Tuesday night, the DOAG board invited me (and all other English speakers) to dinner at a traditional German restaurant (the Golden Posthorne). That was fun, though I definitely ended up eating way more meat than I am used to.

On Wednesday, I did my keynote talk: Guarantee Application Success. I was determined to improve over my last keynote performance for DOAG several years ago. I really didn't think I did a very good job back then. I mostly presented the ideas of someone else (Lawrence Lessig - Code as Law) and I talked way too quickly. A number of people came up afterwards and said "That was a great presentation, Steven, but I could only understand half of what you said." That made me feel really bad.

So this year, the keynote contained all and only my own ideas, which meant I could be a bit more comfortable in my presentation. From what I can tell, it was well accepted. I certainly had a good time doing a talk in a hall that probably held 400-500 people, and offered not only a projection of my Powerpoint on a giant screen, but also threw up an image of me speaking that must have been 50 feet high.

Afterwards, I also sold and signed a bunch of my Oracle PL/SQL Programming, 5th edition. Then a hurried and truncated "Ask Steven" session, then back to the train station, and off to Prague.

So on Wednesday night I took a late flight (10 PM) to Prague and then spent the next two days teaching my Best of PL/SQL class to 25 students. This was my third class in Prague and each time I have been impressed by the quality of the students. Lots of really excellent questions, critiques of my code, new ideas for me to pursue....and I got to enjoy Prague for a little while.

It is a delightful city, especially the sidewalks and especially because I have had the very good fortune to become friends with some current and former employees of Oracle, and they seem to be perfectly to take me out for excellent meals. I had a wonderful dinner with Roman and Lenka at Trattorio Cicala on Thursday (lots of photos on the wall of the owner with big movie starts - Sean Connery, Johnny Depp, Brad Pitt, Vin Diesel - but he didn't ask to take a picture with me. How insulting! Didn't he know who I was? Guess not...), and then on Friday at La Finestra with Petra. Oh and a fine but quick lunch with Roman, Lenka and Martin, who manages the Oracle University team there in Prague. Thanks for organizing the class, Martin!

Then on Saturday morning it was time to go home, or so I thought. I got to the Prague Airport 1.5 hours in advance - and found the entire airport shut down. There had been a fire, apparently. All systems were down, no one could check in for their flight....within an hour, my British Airways flight was cancelled and I was starting to contemplate having to stay an extra night in Prague - or London/Heathrow, but then I got onto a Czech Airlines flight, and was able to catch the third and last American Airlines plane back to Chicago. We are, in fact, starting our descent into my home city right now. [At which I found out that my suitcase was not on the plane; a day later, though, it had been delivered to my house.]

Unfortunately, I go back to an empty house. About 10 days ago, my son, Chris, fell while skateboarding and broke his left leg - badly. Now he has a titanium pin in his left leg and needs lots of help. So my wife, a former nurse, flew down a few days ago to assist.

Well, my house may be empty, but it's still home and I very much look forward to sleeping in my own bed, making my own bowl of old-fashioned oatmeal for breakfast, and so on.

And in six days, I fly back to Europe, to Birmingham, UK for the UKOUG conference!

See some of you there....
SF
Posted by Steven Feuerstein at 8:56 AM